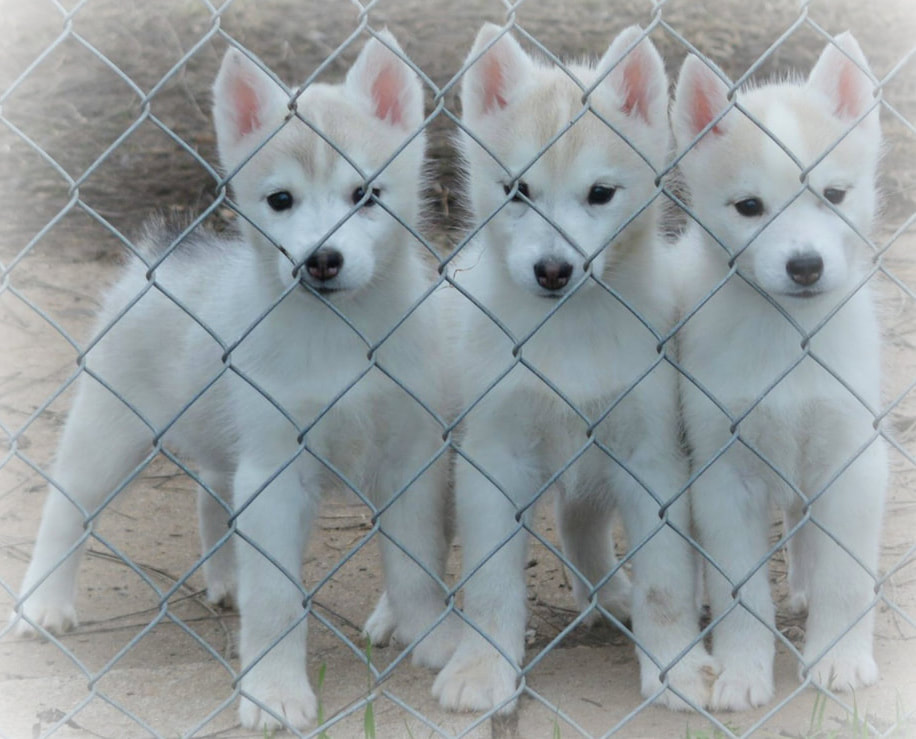 General Apperance
The  Siberian Husky is a medium-sized working dog, quick and light on his feet and  free and graceful in action. His moderately compact and well furred body, erect  ears and brush tail suggest his Northern heritage. His characteristic gait is smooth and seemingly effortless. He performs his original function in harness  most capably, carrying a light load at a moderate speed over great distances.  His body proportions and form reflect this basic balance of power, speed and  endurance. The males of the Siberian Husky breed are masculine but never  coarse;  the bitches are feminine but without weakness of structure. In proper  condition,  with muscle firm and well developed, the Siberian Husky does not  carry excess  weight.Size, Proportion, Substance
Height–Dogs,   21 to 23½ inches at the withers. Bitches, 20 to 22 inches at the withers.  Weight–Dogs, 45 to 60 pounds. Bitches, 35 to 50 pounds. Weight is in  proportion  to height. The measurements mentioned above represent the extreme  height and  weight limits with no preference given to either extreme. Any  appearance of  excessive bone or weight should be penalized. In profile, the  length of the body  from the point of the shoulder to the rear point of the croup is slightly longer  than the height of the body from the ground to the top  of the withers.  Disqualification–Dogs over 23½ inches and bitches over 22  inches.Head
Head Expression  is keen, but friendly; interested and even mischievous. Eyes almond shaped,  moderately spaced and set a trifle obliquely. Eyes may be brown or blue in  color; one of each or parti-colored are acceptable. Faults, Eyes set too  obliquely; set too close together. Ears of medium size, triangular in shape,  close fitting and set high on the head. They are thick, well furred, slightly  arched at the back, and strongly erect, with slightly rounded tips pointing  straight up. Faults–Ears too large in proportion to the head; too wide set;  not  strongly erect. Skull of medium size and in proportion to the body;  slightly  rounded on top and tapering from the widest point to the eyes.  Faults–Head  clumsy or heavy; head too finely chiseled. Stop–The stop is  well-defined and  the bridge of the nose is straight from the stop to the tip.  Fault–Insufficient  stop. Muzzle of medium length; that is, the distance from  the tip of the nose to  the stop is equal to the distance from the stop to the  occiput. The muzzle is of  medium width, tapering gradually to the nose, with  the tip neither pointed nor  square. Faults Muzzle either too snipy or too  coarse; muzzle too short or too  long. Nose black in gray, tan or black dogs;  liver in copper dogs; may be  flesh-colored in pure white dogs. The pink-streaked “snow nose” is acceptable.  Lips are well pigmented and close  fitting. Teeth closing in a scissors bite.  Fault–Any bite other than  scissors.Neck, Top-line, Body
Neck  medium in length, arched and carried proudly erect when dog is standing. When moving at a trot, the neck is extended so that the head is carried slightly   forward. Faults–Neck too short and thick; neck too long. Chest deep and  strong,  but not too broad, with the deepest point being just behind and level with the  elbows. The ribs are well sprung from the spine but flattened on the sides to  allow for freedom of action. Faults–Chest too broad; “barrel ribs”;  ribs too  flat or weak. Back–The back is straight and strong, with a level  topline from  withers to croup. It is of medium length, neither cobby nor slack  from excessive  length. The loin is taut and lean, narrower than the rib cage,  and with a slight  tuck-up. The croup slopes away from the spine at an angle,  but never so steeply  as to restrict the rearward thrust of the hind legs.  Faults–Weak or slack back;  roached back; sloping top-line.

Tail
The  well furred tail of fox-brush shape is set on just below the level of the topline, and is usually carried over the back in a graceful sickle curve when  the dog is at attention. When carried up, the tail does not curl to either side  of the body, nor does it snap flat against the back. A trailing tail is normal for the dog when in repose. Hair on the tail is of medium length and approximately the same length on top, sides and bottom, giving the appearance  of  a round brush. Faults–A snapped or tightly curled tail; highly plumed tail;  tail set too low or too high.

Forequarters
Shoulders–The  shoulder blade is well laid back. The upper arm angles slightly backward from  point of shoulder to elbow, and is never perpendicular to the ground. The  muscles and ligaments holding the shoulder to the rib cage are firm and well  developed. Faults–Straight shoulders; loose shoulders. Forelegs–When standing  and viewed from the front, the legs are moderately spaced, parallel and  straight, with the elbows close to the body and turned neither in nor out.  Viewed from the side, pasterns are slightly slanted, with the pastern joint  strong, but flexible. Bone is substantial but never heavy. Length of the leg  from elbow to ground is slightly more than the distance from the elbow to the  top of withers. Dewclaws on forelegs may be removed. Faults–Weak pasterns; too  heavy bone; too narrow or too wide in the front; out at the elbows. Feet oval  in  shape but not long. The paws are medium in size, compact and well furred  between  the toes and pads. The pads are tough and thickly cushioned. The paws  neither  turn in nor out when the dog is in natural stance. Faults–Soft or  splayed toes;  paws too large and clumsy; paws too small and delicate; toeing in  or  out.

Hindquarters
When  standing and viewed from the rear, the hind legs are moderately spaced and  parallel. The upper thighs are well muscled and powerful, the stifles well bent,  the hock joint well-defined and set low to the ground. Dewclaws, if any,  are to  be removed. Faults–Straight stifles, cow-hocks, too narrow or too wide  in the  rear.

Coat
The  coat of the Siberian Husky is double and medium in length, giving a well furred  appearance, but is never so long as to obscure the clean-cut outline of the dog.  The undercoat is soft and dense and of sufficient length to support the outer  coat. The guard hairs of the outer coat are straight and somewhat smooth lying,  never harsh nor standing straight off from the body. It should be noted  that the  absence of the undercoat during the shedding season is normal.  Trimming of  whiskers and fur between the toes and around the feet to present a neater  appearance is permissible. Trimming the fur on any other part of the dog is not  to be condoned and should be severely penalized. Faults–Long, rough, or shaggy  coat; texture too harsh or too silky; trimming of the coat, except as permitted  above.

Color
All  colors from black to pure white are allowed. A variety of markings on the head  is common, including many striking patterns not found in other  breeds.

Gait
The  Siberian Husky’s characteristic gait is smooth and seemingly effortless. He is  quick and light on his feet, and when in the show ring should be gaited on a  loose lead at a moderately fast trot, exhibiting good reach in the forequarters  and good drive in the hindquarters. When viewed from the front to rear while  moving at a walk the Siberian Husky does not single-track, but as the speed  increases the legs gradually angle inward until the pads are falling on a line  directly under the longitudinal center of the body. As the pad marks converge,  the forelegs and hind legs are carried straightforward, with neither elbows nor  stifles turned in or out. Each hind leg moves in the path of the foreleg on the  same side. While the dog is gaiting, the topline remains firm and level. Faults–Short, prancing or choppy gait, lumbering or rolling gait; crossing or  crabbing.

Temperament
The   characteristic temperament of the Siberian Husky is friendly and gentle, but  also alert and outgoing. He does not display the possessive qualities of the  guard dog, nor is he overly suspicious of strangers or aggressive with other  dogs. Some measure of reserve and dignity may be expected in the mature dog.  His  intelligence, tractability, and eager disposition make him an agreeable
companion and willing worker.

Summary
The   most important breed characteristics of the Siberian Husky are medium size,  moderate bone, well balanced proportions, ease and freedom of movement, proper  coat, pleasing head and ears, correct tail, and good disposition. Any  appearance  of excessive bone or weight, constricted or clumsy gait, or long,  rough coat  should be penalized. The Siberian Husky never appears so heavy or  coarse as to  suggest a freighting animal; nor is he so light and fragile as to  suggest a  sprint-racing animal. In both sexes the Siberian Husky gives the  appearance of  being capable of great endurance. In addition to the faults  already noted, the  obvious structural faults common to all breeds are as  undesirable in the  Siberian Husky as in any other breed, even though they are not specifically  mentioned herein.

The analysis of the Siberian Husky AKC Standard by three breeder Judges.